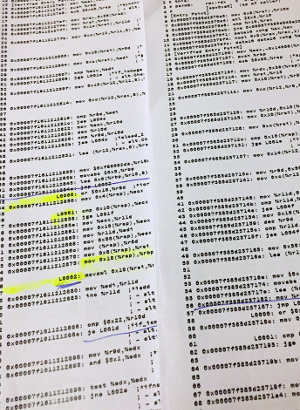 The csv parser that I wrote in SimpleFlatMapper uses a simple loop + state to parse a csv. The code is a lot simpler than other implementation I’ve seen and at the time according to my test was faster. I was testing on java 7, 8 still being very new.

When I ran it on java8 the results were quite confusing. Sometimes fast, sometimes slow. It looked like deactivating TieredCompilation removed the regression I played around and after enough shuffling the problem disappeared. I did not know why and did not have time/skills to really dig into it, it was good enough at the time. Problem solved.

Last week I started to address some code duplication in the parser. And faced the same problem again. Eventually reduced the issue to a few line changes. With a reliable way to reproduce the different scenario it became possible to investigate.

I created a GitHub repo to isolate the behaviour and gather some data. It uses a slightly simplified version of sfm-csv and the benchmarking code mapping-benchmark. The benchmark will parse a csv file, stores the cell in a String[] and pass that to the blackhole.

There are two version of the parser 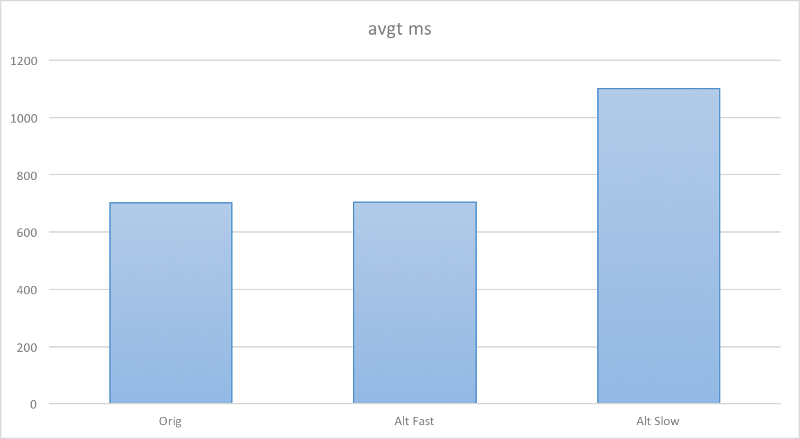 We moved the mark field from the CharBuffer to the CharConsumer. That should have no impact, especially not degrading performance.

It indicates that a slow run spend a lot more time in pushCell/newCell/String init/copy of range code.

vs for a fast run

Looking at the Chain graph in jitwatch we can seem some difference in inlining between slow and fast.

the endOfRow method called in consumeAllBuffer is not inline in the fast run. But in the orig ref run that method is inlined. so also it does make perf better for the alt version it does not cause an issue on the orig version. 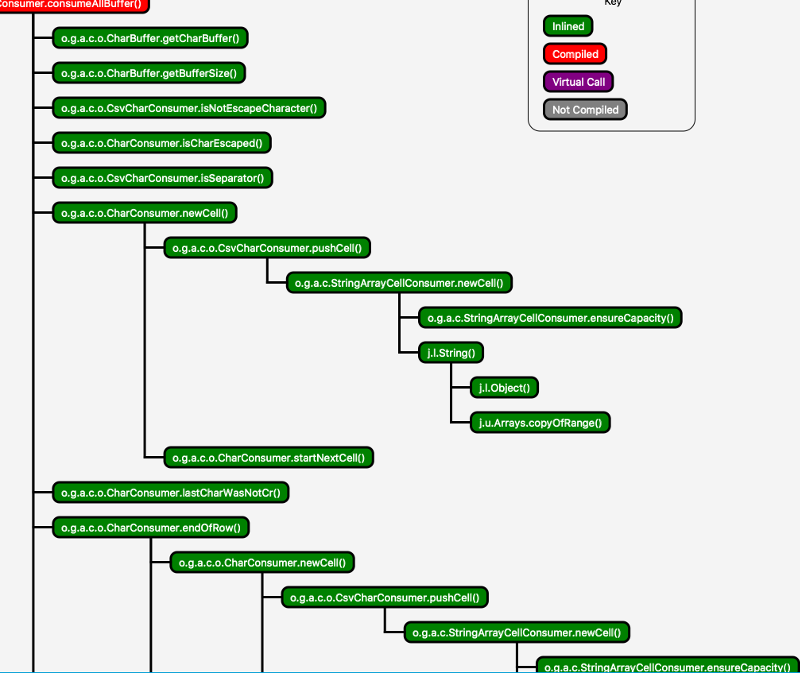 That is quite a confusing picture there, not enough to understand what’s up. The only thing left is to look at the generated asm. I printed two times 22 pages of asm in font size 6 and armed with an highlighter and a pen eventually figured out why alt slow is slow.

That’s pretty much what you would expect.

Now here is the surprise in the asm for the slow run - which has a more aggressive inlining -.

we can see the check on isNotEscapeCharacter, the wrongly named isCharEscaped, but then it fetches cellStart and start executing code from pushCell.

the isSeparator test is done at line 175 after some logic from the pushCell code. Logic is only useful when the isSepartor, CR, LF test is true.

that means the asm between line 90 and 168 is executed for every character instead of only when the char match a ‘,’ or ‘\n’. This is the hot region seen in perfasm that takes more than 50% of the cpu cycles.

why the orig fast case ?

I think that because mark is in an another object. If you look at the compilation log and compare them to the alt slow case you can see the only difference is the bc/dependency declaration not present in the slow run.

why the alt fast case?

endOfRow is not inline for the alt fast case. so the newCell is called only once in the isSeparator code path removing the “need” for placing some of it before the test.

why the alt slow case?

That is the big question. And it probably would need more work here to figure it out but here are a few points

It’s hard to extract something you can learn from. The hack to force the fast past is not much of a problem here but it’s weird to have to do that. If you have unstable performance you might have that kind of issue and then spent some time investigating the asm. But if you don’t that does not mean the problem is not present…

What pushed me to fix it was the conviction that the code should be faster that it was - comparing to jackson csv or univocity. Having a good benchmark line to measure against or having decent expectation can help identifying those issues.